In 2007 IN THE NURSERY were commissioned to write and perform new music for Monumentum II, the grand opening ceremony of the 16th Wave-Gotik-Treffen in Leipzig.

In The Nursery’s performance accompanied a spectacular lighting show that brought the historic Völkerschlachtdenkmal monument to life. Despite torrential rain, an estimated 15,000 – 20,000 people attended the event which was filmed on multiple HD cameras for future release.

Others in the series 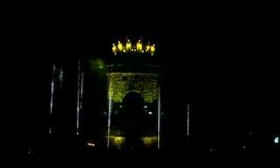