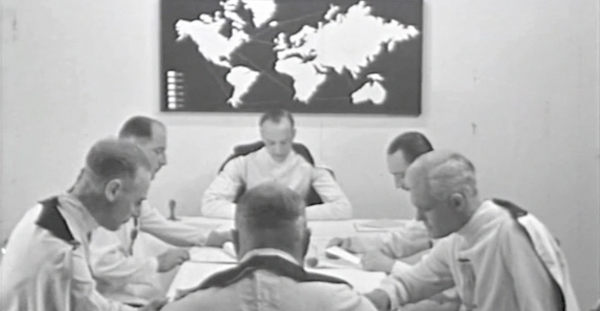 We’re pleased to offer 2 unreleased short soundtracks from projects in 2014 – Crusaders of Space & 150-154 Devonshire Street.
Available now as digital download via the ITN Bandcamp page.
Crusaders of Space was a futuristic amateur film made by the Derby & Parkhead Ciné Societies on 9.5mm film between 1937-1939.
The film deals with life in the year 1980, concerning a scientist who sets off for the moon in a space ship. Intended as a full-length film, production was halted with the onset of WW2 and only a 9 minute version exists.
Nigel & Klive Humberstone added a soundtrack to the film which features (and was filmed by) their father Arthur Humberstone.
Crusaders of Space was screened only once at Sensoria 2014.

150-154 Devonshire Street
A previously unreleased audio piece created for a ‘one night only’ site-specific installation as part of PubScrawl 2014 – a multi-media project that reunited the original line up of ITN (Nigel & Klive Humberstone and Ant Bennett). The concept was inspired by the history of the building on the corner of Devonshire Street and what was Broomhall Street. The building, currently The Green Room but previously known as Casablanca, Mr Kites and The Rickshaw, had been used as a late-license Chinese restaurant, boot repairer, butchers, cocktail bar and bistro.
Roads around the area also had wooden cobbles, designed to quieten traffic as it passed the nearby Royal Hospital.